Extreme Bentley: what for?

On March 3rd at the 2009 International Geneva Motor Show, Bentley will reveal its fastest, most powerful production car ever.Delivering supercar performance, this new model is very much the extreme Bentley.

It will be capable of running on biofuel, delivering on Bentley's environmental commitment and pioneering the use of this fuel in the luxury sector.

Yesterday I talked about the world's fastest electric motorcycle by Yves Behar, and today the aptly name extreme Bentley.

Why the urge of producing environmentally friendly fast/fastest means of transport?

Surely you would assume that future of tranport will be looking at cities scape, space, the ageing population and integration. Modern design solution for transportation do not involve speed not matter how environmentally friendly the vehicles are.

Last month Toyota's iQ inspired Royal College of Art competition unveiled its winners. One of them Dominic Hargreaves found an ingenious solution to a modern urban problem: Stolen bikes
(on average 52 bikes are stolen in London every day).

The student realised that the only way to overcome the problem was to lock the bike somewhere out of the reach of thieves. His solution? A bike lock located 8 feet above the ground.

How does it work?

The bike cradle can be fitted to any wall and is attached to an electronic hoist which lowers to the ground when triggered by the owner’s remote control. The mechanism can also be programmed to read an oyster card if located at a tube station, or indeed any public location. Once the bike is placed into the cradle and locked in position, the user then activates the hoist to pull the bike up onto the wall. The bike is then safely out of the reach of thieves and their bolt cutters. Dominic believes the idea would work on domestic dwellings such as houses or blocks of flats as well as public spaces like railway or tube stations.

The design is one of three winners in the £15,000 iQ Design Challenge set by Toyota to Royal College of Art students and alumni to create products that respond to modern urban life.

The other winning entries include Yu Type, a computer aid designed to help “two-finger” typists increase their speed and accuracy, designed by Yusuf Muhammad and Quicksnap, by Graeme Davies, a quick-release, hygienic ice cube tray that avoids the perennial problem of cubes flying out when the tray is twisted. These are being shown at an exhibition in the College galleries, alongside nine other shortlisted innovative design ideas.

All the shortlisted ideas offer an array of design solutions for contemporary urban living. And given the fact that art and design students tend to be a pretty cash-strapped lot, it’s not surprising that many of the ideas also involve significant thinking-outside-the-economic-box. Just right for these credit-crunch times… 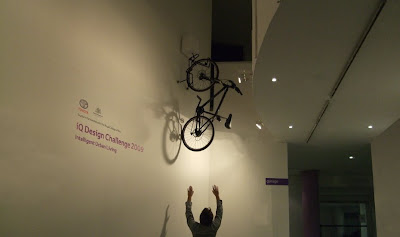 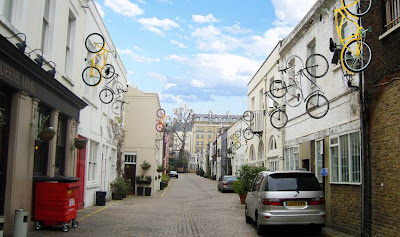