Contenders vie for design's answer to the Turner prize

by Francesca Martin
via Guardian Unlimited 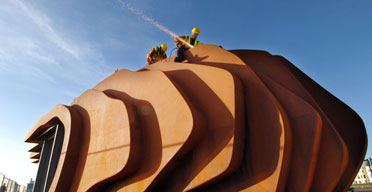 One of the entries ... the East Beach Cafe. Photograph: Roger Bamber


A giant strawberry, a solar-powered shuttleboat and a sleek beachside cafe are all in the running for the UK's first ever international design award.

Intended as the design world's answer to the Turner prize, the Brit Insurance Designs of the Year have been chosen by a team of 70 "spotters", among them photographer Nick Knight and fashion designer Wayne Hemingway. Their shortlist spans seven categories, from fashion to transport to furniture, with entries dating from the past 12 months.