MUMBAI—Mumbai's muddled streets are too packed to walk through, so India's commercial capital has come up with a solution. Uplift the masses—not in some fuzzy metaphysical way, but on "skywalks" made of steel.

Skywalks, India's Sidewalks in the Sky

The streets in the crowded megacity of Mumbai are running out of space for pedestrians, so the city has come up with a lofty solution: Elevated skywalks. WSJ's Eric Bellman reports.

Most streets here have no footpaths. The sidewalks that do exist are bursting from a gridlock of walkers, street vendors and squatters. The scrum has become even pushier recently as hundreds of thousands migrate to this city of nearly 18 million people for jobs created by its economic expansion. Success has also led to an unprecedented number of cars and motorcycles on the road.

To lift the pedestrians that power this city above the fray, Mumbai is building more than 50 elevated walkways. The skywalks will sprout from train stations across the city and snake over the traffic for up to two miles to create a pedestrian express lane.

Shubhangi Ambardekar, a 47-year-old bank employee, used to splurge on an auto rickshaw every workday to avoid the mess on the roads around Bandra train station in central Mumbai. Rickshaws don't like taking such short trips so she would often have to wait 20 minutes before one would take her. Today she uses the new Bandra Station skywalk, strolling two floors above the cacophony. She saves the fare and arrives at work relaxed.

Mumbai Pedestrians to Get Raised Paths 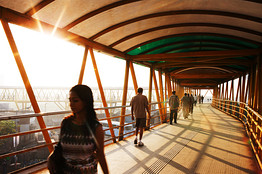 Pedestrians walk to work on a skywalk connecting the Bandra train station and the Bandra Kurla Complex in Mumbai last month.

"There's security, it's clean and we get fresh air too," she said on a walk home from work.

The skywalk Ms. Ambardekar uses was the first the city finished last year. Locals have dubbed the bright, twisting structure the "Yellow Caterpillar." At a height of around 20 feet, it meanders for around a mile, delivering commuters to one of Mumbai's many new office parks.

The fate of the city's foot soldiers is crucial because close to 60% of the trips made here are on foot. That makes this one of the most pedestrian-powered metropolises in the world. Until now, however, pedestrians have been largely ignored.

Some Mumbaikars, as citizens are known, aren't happy. Retailers say they are losing business while residents say skywalks block views, allow pedestrians to peek into private homes and are just as likely to be taken over by homeless families and shopless vendors as the sidewalks.

"Whether you have skywalks or not, the problems will remain the same," says Ashok Ravat, head of the Mahim Skywalk Protest Committee, which was created to block a long skywalk scheduled to twist through his neighborhood in central Mumbai. "This is another huge mistake."

Still, something had to be done, city planners say. The road under the Yellow Caterpillar, like station roads across the city, is an obstacle course through a minefield. Commuters spill down the Bandra Station steps and into a knot of three-wheeled auto rickshaws, buses and trucks on the street below. The closest thing to a sidewalk here is a patch of dirt next to a crud-filled creek. Hundreds of commuters walk in the street, dodging vehicles as they go. 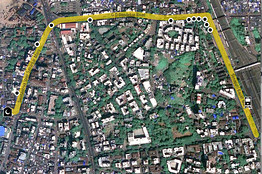 On the way to the nearby business park—home of Citigroup's main India office and the National Stock Exchange—they pass through a slum. The roadside is occupied by small shops, families living in plastic-tarp homes, parked motorcycles and goats rooting through garbage. The tiny stretch of sidewalk that eventually emerges about five blocks from the station is cut short by the fence of a small neighborhood police station built directly on top of it.

Then pedestrians have to find their way across an off-ramp of Mumbai's busiest highway. There is a functioning traffic signal and even a policeman at the corner, but drivers often ignore both.

The obvious solution of widening the sidewalks just isn't an option. Mumbai, formerly known as Bombay, is a thin spit of land bound on three sides by the Arabian Sea. Moving buildings to widen roads is next to impossible thanks to tough tenancy laws. Courts and politicians sensitive to the needs of the micro-entrepreneur make it difficult to move illegal street vendors.

"We clear them and they just come back," says Ashwini Bhide, joint metropolitan commissioner of the Mumbai Municipal Regional Development Authority. "That's why we thought, 'Let's create some additional space on the road by going elevated.' "

Skywalks are quick to build, relatively inexpensive and only require land the city already controls. The projected bill for the 50-plus skywalks is around $300 million. The city expects to recover most of that cost by selling advertising space on them.

While Hong Kong has a network of elevated walkways and Minnesota has its "skyway" system to shelter commuters from harsh winters, Mumbai city planners say they came up with this idea on their own.

"It was a local solution for a local problem," says Ms. Bhide. "Because of a paucity of space and such a short supply of land there is no other alternative."

Building the perfect skywalk, however, hasn't been easy. While the walkways run over government roads, there still often isn't space on the ground to plant enough supporting columns. Longer stretches between columns mean the city has to spend more on stronger, lighter materials and thicker columns. Commuters found the early skywalks too boxy and bright, so new ones use curved roofs, dark colors and chrome.

When engineers started digging to build the foundations, they found the chaos on the street continues underground. A few feet down, they ran into uncharted water, electricity and phone lines as well as sewers, forcing them to redesign whole skywalks. Trying to get the city water authorities or state-run telephone company to shift infrastructure would take too long.

Engineering difficulties and neighborhood opposition have blocked six planned skywalks and could stop more, city planners say. But they will continue building them because the streets are getting worse everyday. The city has hired armed guards to keep skywalks clear and the response from commuters has been largely positive.

Ms. Ambardekar, the commuter, uses her neighborhood skywalk even on her days off.

"Our city is so crowded we don't have a place to walk or exercise," she says. "My friend and I come up to the skywalk for our evening walks."

—Arlene Chang contributed to this article.

Write to Eric Bellman at eric.bellman@wsj.com