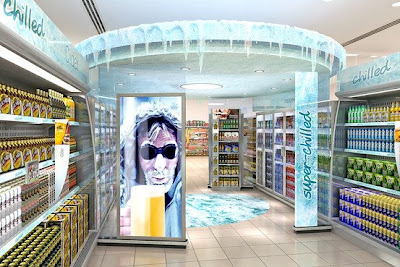 With people going out less often amid the recession and drinking more at home, Diageo is adding a twist to its marketing.
Coming to a supermartket near you this spring, the Diageo "pod," designed to create a partially enclosed, refrigerated beer zone within a supermarket aisle.

Along with the pod, Diageo will also be
installing computer screens in liquor stores to help people plan parties. Customers type in the cocktails they want to serve and the number of guests they are expecting, and the computer prints out a list of ingredients and quantities, including ice. The machines, which the company says are in 500 liquor stores in 38 U.S. states, can also send cocktail recipes via email.

And it works: sales of its Smirnoff vodka grew 2.2% in the U.S. in January, twice the rate of the spirits market as a whole, according to a Feb. 26 report from Credit Suisse, while sales of most big spirits brands fell. Figures suggest that Diageo's campaign will help it get through the recession with a minimal loss of sales.

Aaron O. Patrick via WSJ
Posted by Sophie at 12:20