Putting Innovation in the Hands of a Crowd

IF executives are going to rely on the wisdom of the masses for business help, it’s probably time the masses get a little compensation for it. 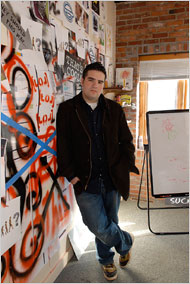 That’s the theory behind Kluster, the newest in a lineup of companies using the Web to channel the collective wisdom of strangers into meaningful business strategies. With a cash reward system for contributors and a big beginning at the TED conference last week in Monterey, Calif., Kluster hopes to attract just enough visitors with just enough business smarts to gain early momentum.

Along with members of the public, the 1,000 attendees of TED, a conference named for technology, entertainment and design that attracts leaders from many industries, used Kluster to generate ideas for a new product, then chose the most promising one and collaborated on the design. The result was “Over There,” an educational board game intended to promote cultural awareness, with questions like, “What percentage of the world’s population lives further than one mile from their nearest pure water source?”

According to Ben Kaufman, Kluster’s 21-year-old founder, there were a few parameters, including provisions that the product could not be wider or longer than eight inches and only specific materials, like single-injection plastic, could be used. Going into the process, Mr. Kaufman said he hoped the product would “be something that doesn’t just serve an uninteresting consumer need, but a humanitarian product that can be used by everyone.”

Mr. Kaufman said that would actually be a departure for him. As a founder of Mophie, a manufacturer of iPod accessories, Mr. Kaufman last year held a product design contest at the Macworld conference, with attendees submitting ideas and using a company Web site to refine designs and vote on the winner.

Out of that came the Bevy — a key chain and bottle opener built into the case for an iPod Shuffle — which Mophie sold by the thousands to retailers around the world. On the heels of that success, Mr. Kaufman in August sold Mophie for an undisclosed sum, then set out to build a business out of the process he used at Macworld.

Kluster includes a number of refinements to that process. Those who join are given 1,000 units of Kluster scrip, called “watts,” and they may earn more by telling the site more about themselves, like their area of expertise, age and income. Meanwhile, businesses are invited to post specific tasks to be addressed, like creating a new product, logo or corporate event.

Participants browsing the ideas offered by Kluster members can bet some or all of their watts on the ideas they most believe in, or post ideas of their own. Those who had winning ideas earn at least 20 percent of the bounty offered by the company that sought the idea, as well as more watts, while those who bet on the winning idea earn watts. Those who bet wrong lose what they wagered.

Mr. Kaufman said several well-known manufacturers would offer projects on the site after the TED contest. He would not disclose the identities of those businesses, but some, he said, would offer $50,000 or more for winning ideas, while others expect to give far less and hope that they have enough good will among their customers to spur ideas.

Kluster will make money, he said, by taking 15 percent of any rewards offered to projects and by charging fees for prominent placement of projects on the site, among other things.

Don Tapscott, the business strategy consultant and co-author of the book “Wikinomics,” said executives were quickly warming to the strategic value of “P.F.E.” ideas, or those “proudly found elsewhere.”

“Throughout the 20th century, we’ve had this view that talent is inside the company,” Mr. Tapscott said. “But with the Web, collaboration costs are dropping outside the boundaries of companies, so the world can become your talent.”

Mr. Tapscott, who credited Procter & Gamble with the P.F.E. concept, said executives can go overboard with the idea of outsourcing innovation if, in seeking such help, they expose too much of a company’s trade secrets. But so far, he knows of no business that has done so.

“They always err on the other side,” he said. “They don’t do enough.”

Among the obstacles in Kluster’s path are sites like InnoCentive and Cambrian House, which operate similarly. InnoCentive, based in Waltham, Mass., was until late last year a forum for solving science-related problems, typically for cash rewards. In September, it expanded into business, engineering and computer science, among other things. Since then it has grown by 15,000 participants, to 140,000, the company said.

Cambrian House, which is based in Calgary, Alberta, and has 64,000 participants, will also expand its Web site this year to accommodate projects across a broader range of industries. Until now, said Jasmine Antonick, a Cambrian House founder, the site has attracted mostly software and Web entrepreneurs.

Ms. Antonick expects the site to be profitable later this year, when it receives a share of payments made by businesses to several of Cambrian House’s participants, like two men who created Gwabs, an online video game that is to be distributed by an undisclosed company this summer.

Next month, it will introduce VenCorps, a site on which venture capitalists and other investors will review business ideas from the public and, after about 30 days, reward the best idea with $50,000 in exchange for a share of ownership.

“No matter how good a V.C. I could be,” he said, “I could never be smarter than the wisdom of a collective community.”

Josh Bernoff, an analyst with Forrester Research, said that Kluster had “commercial potential.” “Asking communities for help with solving problems is certainly going to help businesses,” he said. “It’s just not something you can count on delivering business value yet.”