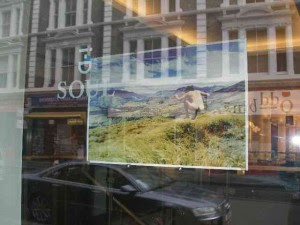 In collaboration with i-D Magazine, Christie’s is delighted to announce that it will host a pioneering exhibition in New York, supported by Gucci, celebrating the recent publication of a 600-page book entitled SOUL i-D. From July 16 to July 30 2009, Christie’s New York will showcase the final leg of a three year international exhibition tour, unveiling the highlights of this highly laudable visual anthology in the United States.

Displayed in the Christie’s galleries in Rockefeller Center, this thought-provoking exhibition will encompass a vivid display of photography, anecdotes, personal experiences, advice and wisdom as featured in SOUL i-D. This best-selling book presents insights and contributions from some of the most creative names in contemporary fashion, music, art and design including Ron Arad, Giorgio Armani, Bono, Neville Brody, Olafur Eliasson, Tracey Emin, David LaChapelle, Chris Martin, Alexander McQueen and Yoko Ono. The brainchild of Terry and Tricia Jones, founders of i-D magazine, this innovative exhibition will be assembled in the form of a suspended eye at the centre of the gallery, proffering a window into the heart and soul of modern society.

This ground-breaking exhibition is traveling internationally over the course of three years. Its worldwide tour began in Europe at the Galerie Azzedine Alaia in Paris in November 2008 following its return to native British soil at Christie’s South Kensington in March, it then traveled to Milan during Salone Internazionale del Mobile, and it will now cross the Atlantic to New York where it will be displayed for two weeks at Christie’s galleries in the Rockefeller Center.

Amy Cappellazzo, International Co-Head for Post-War and Contemporary Art, Christie’s, commented, “Christie’s New York is thrilled to be working with i-D Magazine and Gucci on this innovative and thought-provoking exhibition, presenting photographs, personal insights and wisdom from contemporary artists and designers. We are proud to support such a unique project as a complement to our longstanding belief in the accessibility and approachability of all art that passes through the doors of Christie’s.”

Frida Giannini, Creative Director of Gucci, commented, “Soul i-D is uniquely able to inspire both creatively and through example. It truly touches the soul and that is why Gucci is proud to support the New York exhibition at Christie’s.”

Tricia Jones, Editor of SOUL i-D, commented, “Neither Terry nor I are particularly comfortable in the media spotlight, but over the years I have become increasingly aware of the extraordinary responsibility that being an independent voice within the publishing world carries. Unencumbered by financial suits and strategy gurus we have, within the constraints always of a limited budget, been free in a different way to explore ideas and beliefs that are important to both of us. As I have said to friends and collaborators many times, realising that hugely successful and serious companies choose us to carry their advertising campaigns because they feel that we can, in some way, influence the way someone buys a bag or a pair of shoes made me realise that this also allows us to “use” this influence to think about other things that affect all of our lives – if you like a slightly alternative view of an increasingly consumer-led contemporary society.”